In an Entangled age, be like the Wile Fallet

The Entanglement is a pretty complicated subject – I’m still grappling with understanding it myself – so I want to tell you a story about the Wile Fallet.

In 1993, my dad took early retirement from his job in local government. When he left, he brought a bunch of surplus office supplies home with him – mostly 315gsm Manilla Foolscap wallets, branded ‘10″ WILE FALLET’.

We ended up with dozens of these Wile Fallets in various different colours. I remember them as an integral part of my childhood. They were used for everything, from storing home files to homework. I got so used to seeing the ‘10″ WILE FALLET’ sticker that to this day I’m unable to say ‘file wallet’ without it sounding wrong.

Wile Fallets have followed me everywhere for 25 years. I took a stack of them to university, by which point they were already at least 12 years old. I took some up to Glen Coe. When I moved to Lincolnshire, I brought the first draft of my first novel back in a Wile Fallet, and I used more for storing paperwork since.

We live in an era when information is terrifyingly vulnerable, stored on bewilderingly complex machines thousands of miles away that are beyond our personal understanding

Slowly, one by one, my store of remaining Wile Fallets has dwindled. They’re pretty hard wearing, but they aren’t immortal; after heavy use over many years, they tend to split at the seams. (I managed to destroy one Wile Fallet over a mere three-year period during my degree, but that was a disappointing outlier.)

I’m down to my last two.

One has been in continuous use for at least 10 years, and is in great condition. The other has mostly held paperwork in drawers for at least as long and looks about the same. The colours have not faded, and the metal binding clips have not rusted.

Until today, I hadn’t noticed my Wile Fallets, not really. They were just objects that had always been there, like pencils. I hadn’t even really thought about the fact that these document wallets date from my early childhood. I certainly didn’t feel sentimental about them. But then I happened to look at the phone number for Sabell Birmingham on the label and realised it dated from before ‘01’ was added to UK phone numbers in 1995. Then I dredged up a hazy memory of the house suddenly being full of paper and document wallets when my dad retired in 1993. 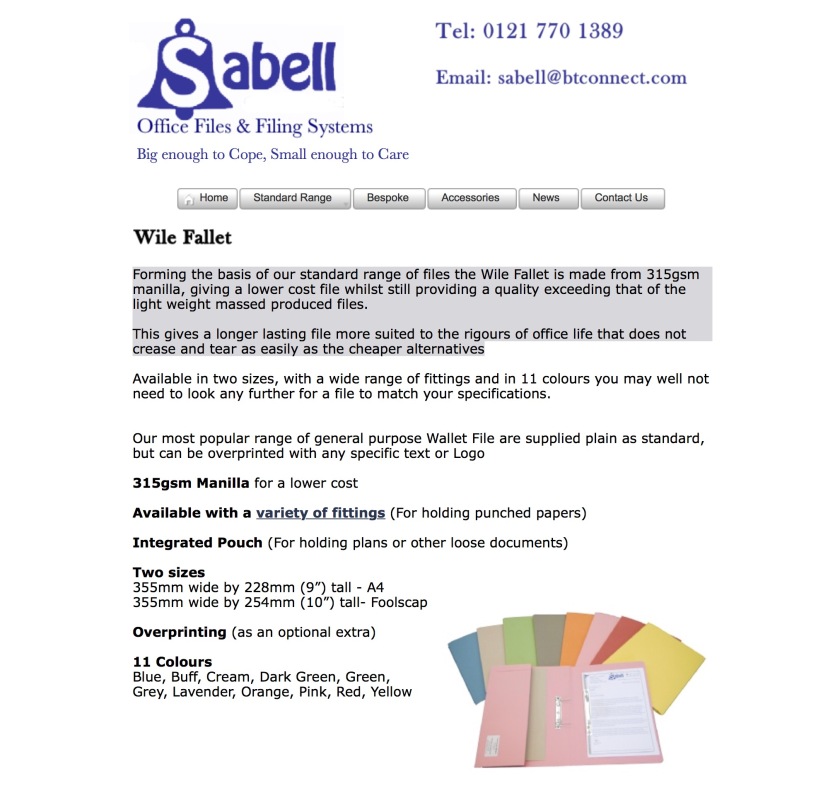 I’ve looked up Sabell. They still make Wile Fallets. The website is utterly charming and a beautiful example of how the web used to be before it all went downhill. The copy on the Wile Fallet product page even sounds like I’d imagine a Wile Fallet would sound, if they could talk:

Forming the basis of our standard range of files the Wile Fallet is made from 315gsm manilla, giving a lower cost file whilst still providing a quality exceeding that of the light weight massed produced files.

How charming is that?

I think there is something reassuring in such permanence. We live in an era when information is terrifyingly vulnerable, stored on bewilderingly complex machines thousands of miles away that are beyond our personal understanding and controlled by corporate demi-gods. Our information is under constant attack and could be leaked to malign forces (or annihilated) at any time. Sometimes marketing even convinces rational people to pay money for the privilege.

Information storage today is a perfect example of almost everything in the era of the Entanglement: some old problems have been solved, but vastly more have been created, and we have lost virtually all personal control of the information. We have to negotiate with our technology now for it to yield any value, while constantly dodging the vast and terrible threats created by its rampage across the world.

The Wile Fallet is not a product of the Entanglement; it is a product of the Enlightenment. The Wile Fallet does only one thing, and that is store information in a safe, stable place for decades, assisting your lifelong quest for knowledge. Until entropy destroys its physical structure – a predictable and observable process – you are in total control of it. It cannot be weaponised by criminals on the other side of the world or used to personalise ad content against you. It won’t suddenly erase itself, change how it works for no good reason, or charge you a subscription fee to access your stuff. Its contents won’t become unreadable if you fail to upgrade to the latest model.

In an Entangled age, be like the Wile Fallet.

Writer and editor. View all posts by Alex Roddie

One thought on “The Wile Fallet”